The Music Section of the FEF, named after Matilde Fiorini Aragone, was established in 1993 through the initiative of Maestro Clemente Terni with the objective of promoting research on music and musical education, with particular focus on the Middle Ages and early Renaissance. Through the activities of the Music Section, Clemente Terni sought especially to renew medieval studies placing emphasis on the critical role of music, the one discipline in the quadrivium that was at the same time an art form.
Over the first ten years from the inception of the Music Section, Clemente Terni was the force behind many conferences and discussions. He organised monthly workshops on themes pertaining to music theory and performance praxis and gave a course on medieval song, where participants learned how to put into practice his concept of liturgy and the relation between word and music. Live music still retains an important role in the Section, as it is considered an integral part of the scientific activities. Musical groups founded by Clemente Terni, the «Quintetto polifonico italiano» (now directed by Guglielmo Visibelli) and the group «Musica instrumentalis» (directed by Pietro Beni) continue to feature in the events organised by the Section. At the same time, the Section has launched wide-ranging initiatives, some of which international, with the goal of giving scholars scientific works of high level and innovative instruments for research. Among these is the database MEM «The Musical Middle Ages. A bibliographical bulletin on medieval music», joined by the online repertory ITMI, «Indices of Italian musical treatises», which is supported by important musicological institutions like «Répertoire International des Sources Musicales» (RISM), and the collection «The Musical Tradition. History and Texts».
From 2004 on, after the loss of Clemente Terni, the Music Section has carried on his work, developing projects already underway and taken on new initiatives. MEM is now available online through the Mirabile portal. From the experience with MEM, the Section launched a new course in 2005: «Course on medieval music. Problems of classification and bibliographic methods», tied in with a series of interdisciplinary workshops for in-depth study. The project «Polifonia italiana trecentesca» (PIT), which benefits from close collaboration with the Dipartimento di Musicologia e Beni Culturali di Cremona (Universitˆ di Pavia), has been underway since 2009.
Further initiatives are linked to Terni in his capacity as composer and performer, keenly tuned in to the new frontiers of contemporary music and in particular computer music; one of these is the journal «Music/Technology», directed by Marco Ligabue. 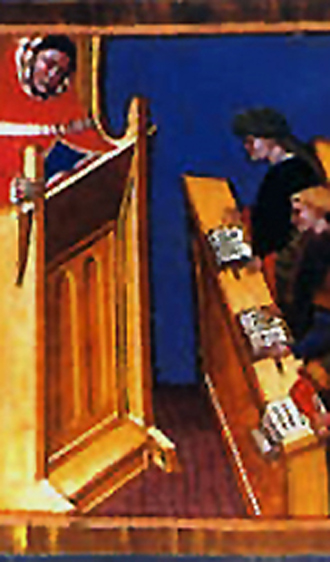